Over 70 Years at the centre of Dunston Community.

On Sunday 17th November we are delighted to welcome to Dunston

The Pentabus Theatre Company who recently appeared on BBC's Countryfile.

They will be performing a new play by Robert Alan Evans called  'The Tale of Little Bevan".

The Tale of Little Bevan

In a peaceful Norfolk village three people are seeking happiness.

But as the harvest moon fills and the party begins, ancient forces are brought to life.

While Tony and Mike get trapped in the tunnels below the village, Gill's plans for revenge turn sour.

A darkly comic journey through 24 hours in the life of a village called Little Bevan, this new play by the award winning playwright, Robert Alan Evans promises live music, storytelling and the spirit of a 10th century saint. 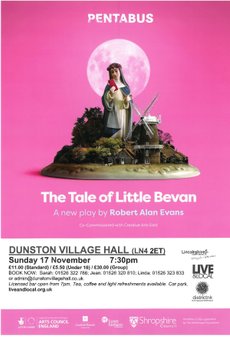