Over 70 Years at the centre of Dunston Community. 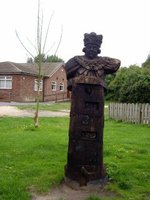 In 1751 Sir Francis Dashwood (owner of Nocton Hall and founder of the Hellfire Club) commissioned the building of Dunston Pillar, the first inland lighthouse to be built in England to guide travellers across the heath to Nocton and Dunston.

In 1810 the Earl of Buckingham replaced the beacon with a statue of George III to celebrate the King’s golden jubilee.

In 1940 the statue was removed from the top of the pillar because of the risk to low flying aircraft from nearby RAF stations.

The column of Dunston Pillar  can still be seen from the A15.

The statue of King George III  is on display in the grounds of Lincoln Castle.

In 1991  a carved replica of Dunston Pillar was created in the grounds of Dunston Village Hall.

Children from Dunston St Peter’s Primary School painted small plaques of Dunston scenes that were inset into the “pillar” of the statue.

This iconic statue of the King George/ Dunston Pillar stood guard over Dunston Village Hall grounds until February 2015 when the wooden structure had rotted and it was toppled over.

Sadly, none of the original statue could be saved. 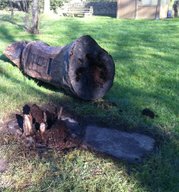 In 2018, Nina Alexander-Hill was commissioned to create a ceramic plaque to commemorate the wooden statue.

On the 1stof November it was mounted on the wall in the Main Hall. 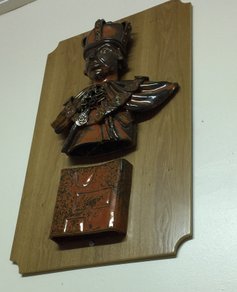